Can’t Google? Gayle it! Life lessons on the long-term impacts of cancer. 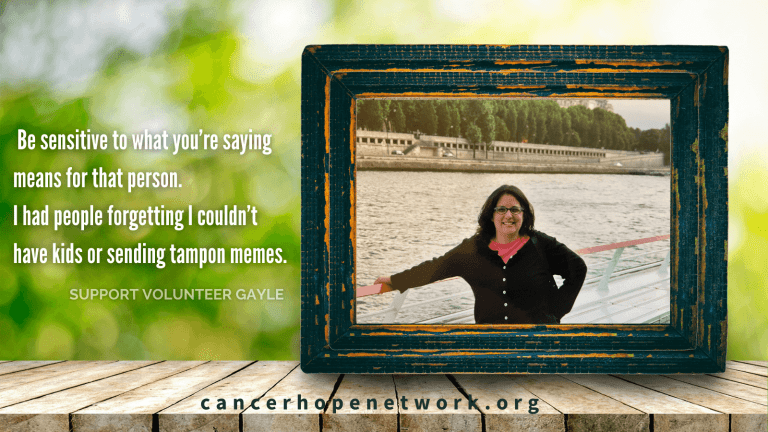 Cancer Hope Network Support Volunteer Gayle faced cancer as a young woman. She’s been helping others ever since as a peer support mentor and a champion for cancer survivors after they’ve ended treatment. “There’s not enough focus on the after. There needs to be more support and resources for survivors. It’s a little like the issues faced by Vietnam veterans. People are dying. Yes, but some of us are living for a long time.”

Doctors discovered LMP (Low Malignant Potential – “abnormal cells that may become cancer, but usually do not.”) Although her risk was low, 25-year old Gayle began regular follow up with a gynecologic oncologist. That decision may have saved her life.

Gayle was diagnosed with ovarian cancer a year and a half later. She recalls the surreal feeling of sitting in her office, with her mother on another line, as the doctor gave her the news. Although the doctors did their best to preserve her future ability to have children, Gayle soon found herself a young woman in New York, surrounded by family (both brothers had welcomed daughters only months before) and the growing realization that she might not have a family of her own.

She had to learn about navigating dating as a survivor. “When do you tell someone? How do I explain my scars? The one from my port is frequently visible. Others, not so much. Some guy said something about my short hair and suddenly, I was feeling all sensitive. I felt like I was always tripping over my words.”

She was also learning to navigate life as a young professional, who also happened to be a cancer survivor. Options for changing employers were limited – “People at work knew my story. I didn’t have to go through a long explanation if I had to leave for a three-hour doctor appointment” – as were her insurance options – “Before the laws changed, I was afraid to leave my job because of pre-existing conditions.” The ripples of cancer impacted her finances for years.

“I was living with my best friend at the time and she was supportive – but it was really challenging. We were so young and I was facing a cancer that usually impacts older women. I went to a support group and all the women were twice my age. For some of my friends, this was the first really serious thing they’d had to confront.”

But as many patients learn, cancer doesn’t always end when the final suture is removed, or the bell is rung at the end of chemotherapy. Do a Google search for “long term effects of cancer” and you’ll find more than 850 million results. “Side effects of medically induced menopause?” More than 6 million. “Long term consequences of cancer treatment?” You’ll find 8 billion results. There are literally more articles and pieces of information about the ongoing impact of cancer than there are people in the world.

Gayle’s initial diagnosis and treatment were soon followed by the ongoing side-effects and health complications faced by so many young adults fighting cancer: colitis, followed by surgery to “unstick” her colon and uterus in 1999. In July 2001, Gayle stopped attending therapy, “I need to see what life is like post cancer, post-therapy.” Scheduled for same-day surgery to remove another tumor, she woke up with massive abdominal bandages and was there for a week. She missed ten more weeks of work after that surgery as she experience another a severe colitis flare-up. They were unsure if the cancer was back but fortunately just another LMP.  And then September 11th arrived in the city she loved.

Through the years, she’s faced colitis flare-ups became so severe that she had her entire colon removed, along with her uterus (as it seemed superfluous at this point)  Yet again they found another LMP, which she would not have known it was there if she didn’t have the surgery.  Fortunately, she has not has another LMP since then.  She was diagnosed with seronegative arthritis due to the colitis, followed by osteo arthritis brought on because she’d gone through menopause so early in life.

Gayle counts herself fortunate – she was living in a big city, with access to extraordinary resources (like SHARE Cancer Support and “an awesome group” for young adult cancer survivors at Sloan Kettering.) She had great support from family and friends who rallied through 9 surgeries over the years. “My employer was very supportive, gave me a computer at home (this was before people had computer’s at home), a cot in the office, money for a hat with subway tokens taped into the card (aka pre metrocard).” Others marched and supported her fundraising efforts for the SHARE walk. She “didn’t have to worry about getting pregnant when I didn’t want to,” met “some great people” and was soon helping others as a Support Volunteer for Cancer Hope Network. (Then known as CHEMOcare.)

She encourages patients and survivors to prioritize their own well-being. “This is the time for you to be selfish. Do not try to be a hero. Women especially need to hear that message.”  She’s helping friends now going through traditional menopause, “I’ve been there. Done that.” And she encourages the friends and families looking for ways to support a newly diagnosed loved one to LISTEN and THINK. “Be sensitive to what you’re saying means for that person. I had people forgetting I couldn’t have kids or sending tampon memes. They’d tell me it was because I was so healthy, they just forgot. But that didn’t help.”

To connect with Gayle or another Support Volunteer mentor or to learn more about sharing your own experiences as a cancer survivor or caregiver, contact Cancer Hope Network – 877-HOPENET (877.467.3638) or visit cancerhopenetwork.org.

“There’s not enough focus on the after. There needs to be more support and resources for survivors. People are dying. Yes, but some of us are living for a long time.”