A bag of FU and hope. 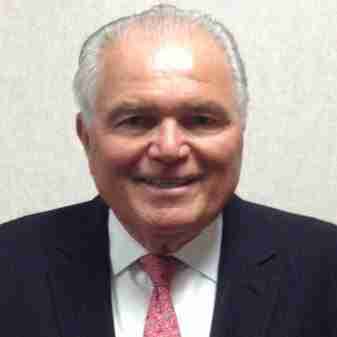 Michael Korb was 59 when he was diagnosed with colon cancer. He had no family history of cancer and had been putting off the colonoscopy he knew that he should get. After two days “with the worst gas pains ever,” Mike decided it was time to check colonoscopy off his to-do list.

Unfortunately, the scan revealed polyps – some clearly benign and others not so clear. He scheduled laparoscopic surgery to remove them “to be sure.” What was supposed to be routine surgery quickly became something else.

“I went in to have it removed laparoscopically. Five hours later, they’ve removed a cyst the size of a meatball, along with 14 inches of colon. My surgeon, Dr. David Ward sent the cyst to the lab and gave us the dreaded diagnosis and recommended an oncologist to help us move forward.” His oncologist, former CHN trustee Ken Adler, walked him through the benefits of chemo therapy (a reduced risk of recurrence) and suggested that, based on his markers, Mike would be the perfect candidate for a clinical trial in addition to the gold standard treatment he’d be receiving. 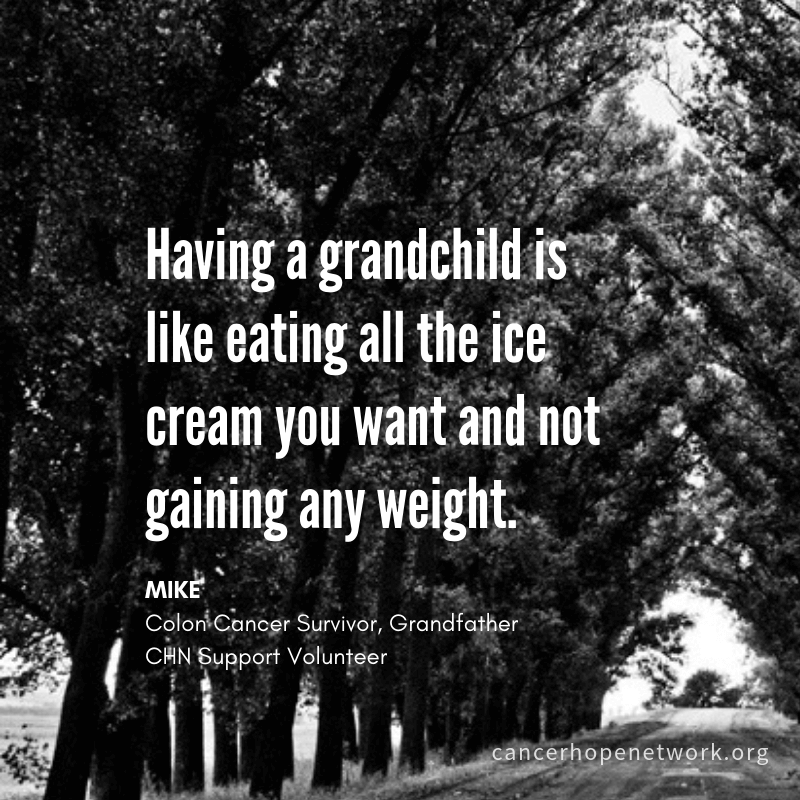 The trial was testing the efficacy of drugs that had been successful fighting other cancers. Instead of 3 hours for each chemotherapy treatment, Mike would need to stay for six. Plus, he’d be required to extend his treatment for six additional months.

Dr. Adler explained the pros and cons carefully, showing the empathy that is his hallmark. Even facing cancer, Mike wanted to help. He signed up.

“The additional drug we were testing had minimal side effects. I was never promised that the treatment would be the greatest thing since sliced bread, but I knew it’d be helping others,” he reflects. “What did I have to lose, other than time?”

Mike counts himself lucky. He views initial diagnosis as the most difficult part of his fight. “People die from cancer. It was an initial shock. But it became much easier after that.”

He worked through treatment, even travelling a bit. “I was lethargic, but not sick. I forced myself to get busy, get in the shower, stay busy. I got up every day with a sense of purpose. That’s what kept me going, what gave me the energy to keep moving. I was lucky. After speaking to so many others about their reactions to chemotherapy, my reaction was in the top 10% best possible version.”

A self-described “healthy guy,” he recalls feeling fortunate while getting his weekly infusions. “How could I possibly feel sorry for myself? I’m here once a week, there’s a woman who’s had every day treatments for 28 days. There’s a parent whose kid is receiving treatment. It was easy to keep a positive attitude because others had it so much more difficult.”

Plus there’s Mike’s sense of humor. His weekly treatment included a bag of medication that he carried with him. “If you go in Wednesday for three hours, you leave with a bag and a wire and have to come back Friday to give it back. I was receiving chemo, but I could go to work. I put the pouch on my belt, hidden under a sport jacket. Guy asked what was in the pouch and I responded honestly – FU. (the name of his drug)”

For ten years, he’s channeled his zest for life and sense of humor into helping others as a CHN Support Volunteer. “On some calls, the person is initially very reticent about saying anything to me. I’m just a voice on the other end of the phone. When they realize I’ve had the same diagnosis, treatment and issues they’re facing, they open up. A lot of people need some kind of cheerleader. They need reassurance from someone who has been there, done that. I become that cheerleader.”

He encourages anyone diagnosed with cancer to get connected to a Support Volunteer. “So many people have well-meaning people in their lives who don’t know how to handle it. To call on someone who went through what you are makes life a little easier.”

Today, the husband (he and his wife will soon celebrate their 45th anniversary), father and Army veteran who served in Vietnam is enjoying the life he once dreamed of, full of good health, golf and travel. Best of all, there’s lots of time with his grandson – “Having a grandchild is like eating all the ice cream you want and not gaining any weight.”

Sarah is the Director of External Affairs at the Cancer Hope Network, where she helps connect people need help with folks who want to help and oversees the organizations collaborative relationships.

People need some kind of cheerleader. They need reassurance from someone who has been there, done that.” Mike, CHN Support Volunteer 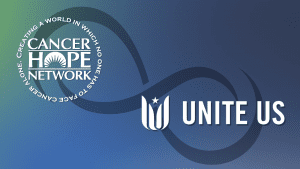 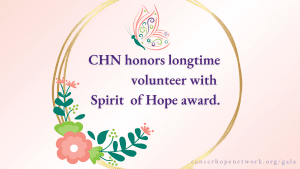 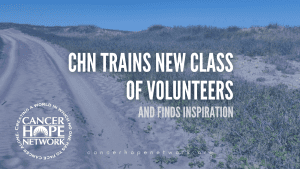