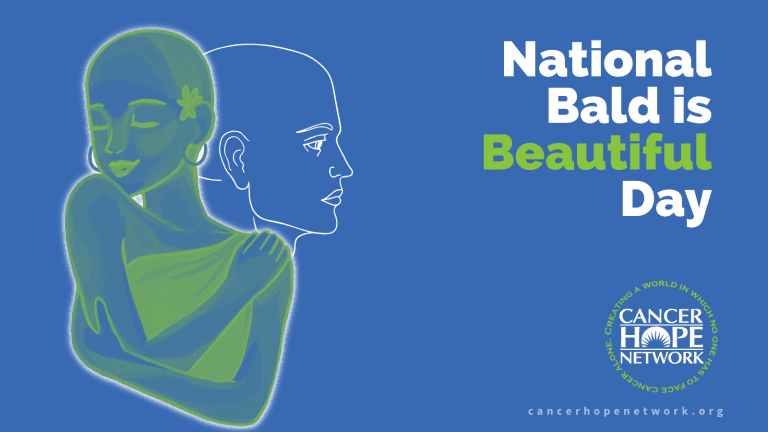 Many people who undergo chemotherapy as a treatment for cancer experience hair loss. This loss, when added to so many other changes and challenges, can be especially difficult. Hair is a part of who we are – often surprisingly central to how we view ourselves and how we want others to view us.

Earlier this week, social media feeds were filled with #BaldIsBeautifulDay posts. For some, it was a chance to rock hairless pates brought on by time and genetics. But for others, it was an opportunity to reclaim their power over a disease that steals control.

Finding power in a smooth crown is something our cancer survivor volunteers know a little bit about. They have learned firsthand that while hair loss is a cause of distress, It’s important to remember that bald is beautiful.

A few of our amazing Support Volunteers share their own “bald is beautiful” stories in their own words.

“I was diagnosed in June 2013 and started chemo and radiation simultaneously to shrink my exceptionally large tumor for it to be able to be surgically removed in the future. My chemo regimen included the platinum-based cisplatin, which usually causes hair loss.

My oncologist told me that I would begin losing my hair within two weeks. When this began with clumps of hair in my hairbrush and in my hand and on my pillow in the morning, I decided to shave my head rather than witness this slow and distressing process. It was a shock being bald, but I felt more in control and my husband and stepson, who have both experienced significant male pattern baldness, were significantly amused. My mental health was once again more appropriately focused on my health and not my hair. Until the process continued and all my body hair and eyelashes fell out too! Now, even though I welcomed having smooth legs without any personal care effort, I really did not appreciate having eyelashes to coat with mascara when I wanted to look less “sick.”

All my hair started to grow back within 6 months and came back a bit lighter in color, less thick and less curly. So, nearly 9 years later, I have not cut my hair since, except for trims. It has grown to waist length, and I enjoy it very much! If I am healthy and my hair is healthy, I plan to enjoy our remaining time together!”   – Support Volunteer Sue

“I embraced the bald-life for both diagnoses and the requisite chemotherapy treatments. The first time, I had cut off my longer hair before the start of chemo, donated the hair to ‘Locks of Love’ and then wore a pixie cut for a few weeks.

When I started shedding like a dog, my dear friend, who was like a brother, drove down to Dallas from Oklahoma City to shave my head. We had a party of it, going to Sally’s to buy new clippers and then sitting outside in my yard with some alternative rock as our playlist and a shot of whiskey to toast the end of the affair.

Shaving my head was an easy decision for me since I felt I was taking control of what was happening which was important for my psyche when so much of what I was experiencing I did NOT have control of.  The 2nd time I prepared for chemo, I had the same attitude regarding my hair loss. I broke out those clippers from Sally’s and shaved my own head in my apartment bathroom.

I really tried wearing a wig when I was bald during both treatment chapters, but truthfully, they made my head hot and overall, I felt uncomfortable. I had “casual” head wear cotton bandanas that I wore most of the time and then synthetic silk-like oversized scarfs that I wore when I had a reason to dress more formally.

I know for some cancer chemotherapy patients, loosing hair is one of the more traumatizing aspects of treatment. I can offer that after both my cancer chemo protocols were over, my hair grew back. And getting through treatment, to the point where I was in remission, was the bigger prize. For me, being bald was a small price to pay to achieve that end goal.” –Support Volunteer Stephanie

“For me, personally, the hair loss was never a big deal. In fact, before I began treatment, I asked my hairdresser to cut my hair short. I felt this would lessen the ordeal when I would have her shave my head. Right on que, I began noticing hair loss about 2 weeks into treatment. Nothing severe now but I knew it was coming. I made the call to have my head shaved. My husband, in support of me, shaved his as well. I told him it wasn’t necessary, but he really wanted to shave his head. He was looking forward to it, his enthusiasm lightened the mood. At one point he even sported a mohawk! In hindsight, while I told him it wasn’t necessary to do it, there was something inside of me that said, “it was nice to have a buddy walking through this with me.” My heart was full.

Our hair stylist of many years came to our place and shaved both of our heads “on the house.” She also brought me three or four headcovers. Before she shaved my head, she placed the clippers in my hand and said, “I think you should make the first cut. You are in charge here, not cancer.”

Of course, the tears flowed because of her kindness. After, I looked in the mirror and thought “Not so bad but whose ears are those?” My hair had always covered my ears, so it was strange to see the whole ear.” – Support Volunteer Terry

As you can see from Sue, Stephanie, and Terry, embracing baldness is a great way to cope and remember to surround yourself with love and support. You are beautiful, bald is beautiful. National Bald is Beautiful Day was earlier this week and we celebrate and honor that beauty every day.

Facing your own hair loss? Want to speak with a volunteer who understands the fear of eyebrows never coming back? cancerhopenetwork.org/patient-and-caregiver-support

Bald is beautiful – but it can be challenging too. On National Bald is Beautiful Day we celebrate that beauty and share how other #cancer survivors coped.