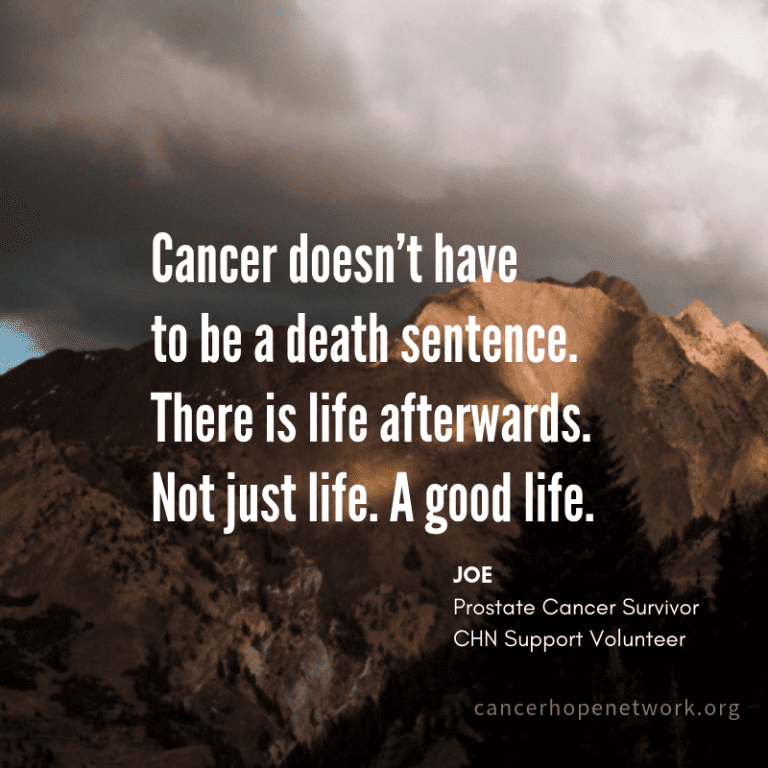 When blood tests showed slightly elevated PSA levels, Joe Borzacchiello’s doctors were cautiously optimistic, telling him that few patients with similar levels had cancer. In fact, the chances of him having cancer were only 20 percent. So he was hopeful. “In Vegas, 80% is great odds,” he laughs. “But I didn’t want to gamble with my health, so I had the biopsy.”

“The lottery you don’t want to win, I won,” he recalls. “When I first heard the words prostate cancer, it was strange. It felt like my doctor was talking to someone else, like I was an observer. It wasn’t until the next day that it started to sink in.”

Ask nearly any cancer survivor what advice they’d have for a newly diagnosed patient and one suggestion comes up again and again: Don’t spend too much time on Google. Online or off, find trusted sources of information and stick with them.

But, like so many patients have discovered before him, that’s easier said than done. Joe’s self-proclaimed analytical personality had him researching the pros and cons of treatment options and searching for perspective from others who’d faced similar diagnoses. “I know it’s not suggested,” he admits. “I shouldn’t have done quite so much research. The horror stories I saw…” he trails off. “Online, what gets a lot of attention? The negative. You see the bad reviews. You gloss over the good ones.” 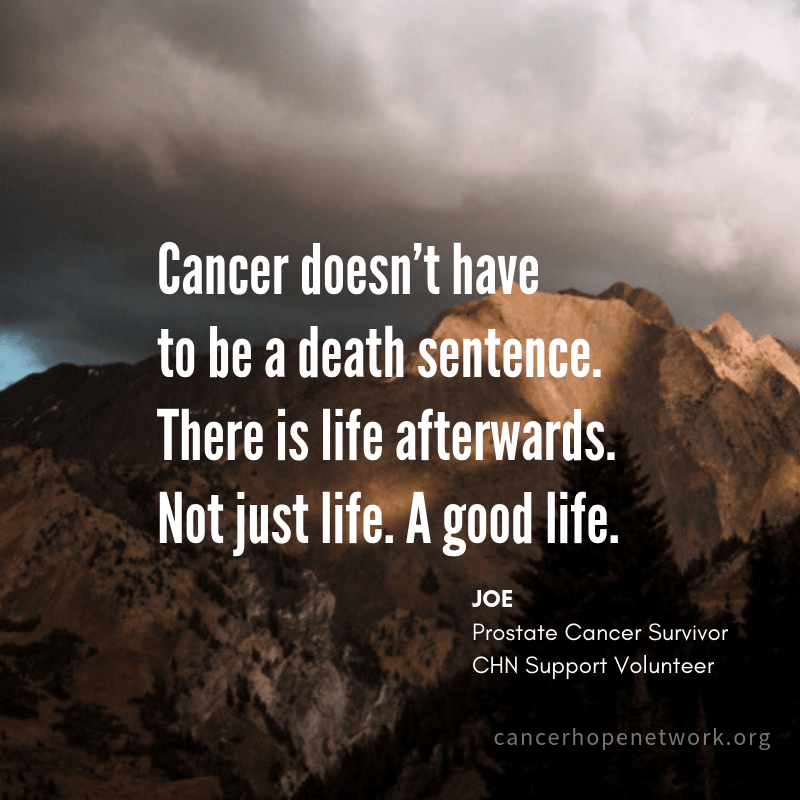 His search also led him to connect with several survivor mentors, including a Cancer Hope Network Support Volunteer. Their conversations gave him the perspective he needed. “Cancer doesn’t have to be a death sentence. There is life afterwards. Not just life. A good life. CHN is a way to highlight the entire reality and spectrum of reality – good and bad.”

For Joe, cancer was an opportunity to see how deeply loved he was. His beloved daughters leapt into action, allowing Joe to see them in an entirely new light. “It was incredible learning how your children can handle a situation. My oldest daughter even bossed her husband into helping.” 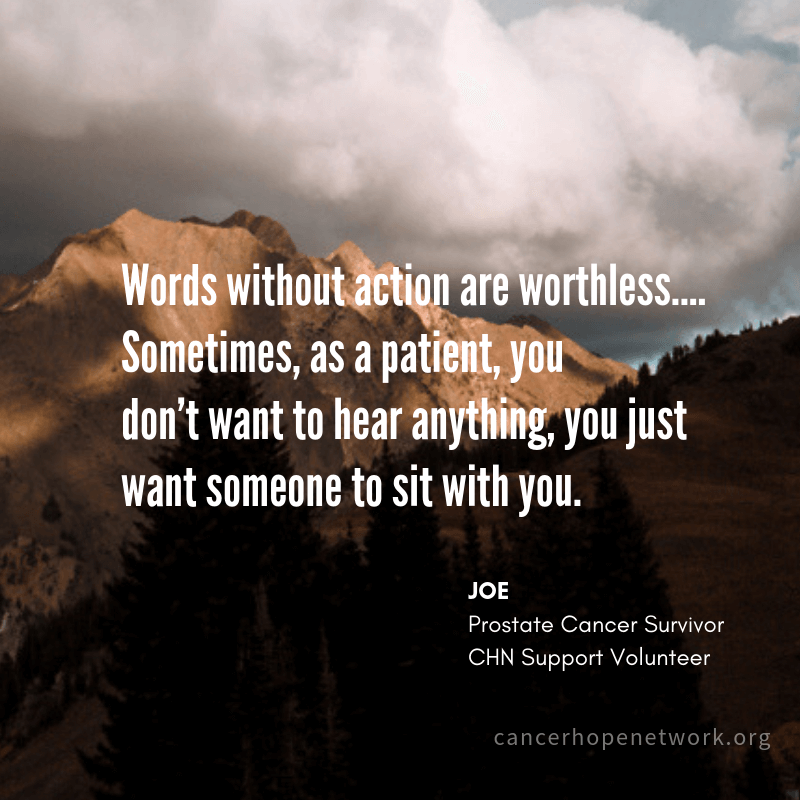 Other support came from less expected, but deeply appreciated people in his life. “I have a friend from the theater and he made himself available 24-7. He has a wife and kids, but day or night, it didn’t matter. If there was anything I needed, He was there. In the weeks after my surgery, it felt like I heard from him every day. Checking in. Texting. Calling.”Another unforgettable kindness came from a friend who made a late-night run to the store while Joe was homebound with his catheter. “It was nearly midnight and she went to get what I needed.” These thoughtful shows of support brought other relationships into stark relief, as other friends stopped calling or avoided talking about his diagnosis. 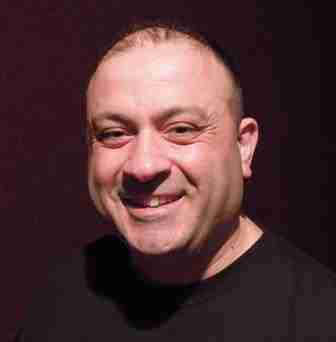 A dedicated Christian, Joe found strength in his faith. “I believe our lives are not just a random series of events,” he says. “I believe God knew what I was going through, that it wasn’t something I was taking on by myself. Even when my friends weren’t there in the way I wanted, I knew God was there for me.”

Despite that faith, he struggled with people who offered to pray for him and then fell off the map. It was a lesson that love and faith must be put into action. “Sometimes people just need someone to sit with them. Words without action are worthless. We communicate a lot – with typing, with words – but sometimes, an action speaks so much. You can use all the words in the world, but the hurting person may not hear them. Sometimes, as a patient, you don’t want to hear anything, you just want someone to sit with you.”

He understands that cancer is shattering for more than just the patient. “You can’t internalize it. Initially, it’s just you. Then you start seeing that there are other people who are affected by your cancer. Communication is very big. Especially when dealing with family and friends. Those people wind up becoming your support system.”
“It’s ok not to know what to say,” he encourages loved ones who don’t know how to react. “It’s ok to say ‘I don’t know how you’re feeling. I haven’t been through this but I’m here for you.’ Don’t let that stop you from reaching out. It takes 30 seconds to pick up your phone and send a text or check in.”

As a Support Volunteer, he’s the embodiment of empathetic support. “I wanted to be there for someone else, because I had someone there for me. I’ve had different surgeries in my life. This was by far the most difficult. It’s a life changing event. As a Cancer Hope volunteer, I’m someone they can turn to, even just to ask questions. Many people can provide sympathy. I provide empathy.”

Cancer doesn’t have to be a death sentence. There is life afterwards. Not just life. A good life.