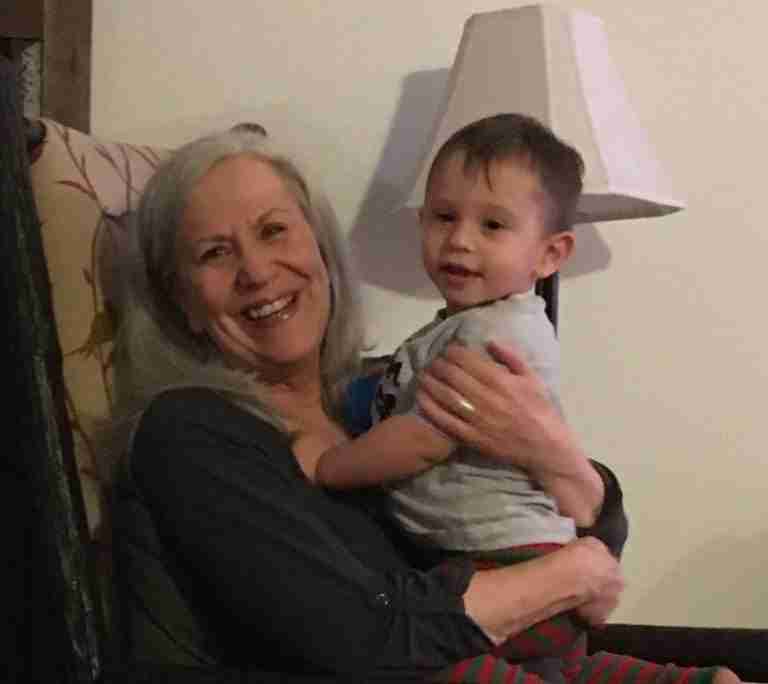 What do you call a middle school special education teacher who’s survived melanoma and is now living her boldest, best life with one leg? Support Volunteer Emily Parker.

After two and a half years bouncing between doctors – from dermatologists to a podiatrist – the recurring crack on the bottom of her right heel was biopsied. And the results were grimly clear: Emily had melanoma.

“My doctor was devastated at having missed it,” she recalls. “I’d been going to him for two and a half years and we’d never biopsied it.” Rather than dwell on her missed diagnosis, Emily began to fight. But first, she made the choice to forgive her physician. “I’ve made mistakes too. What value would carrying a grudge bring to me? I was a zebra in a horse pasture. Over the months, we kept running into each other around town. I always spoke to him. I always greeted him. He finally realized that I wasn’t out to get him. I was doing fine.” 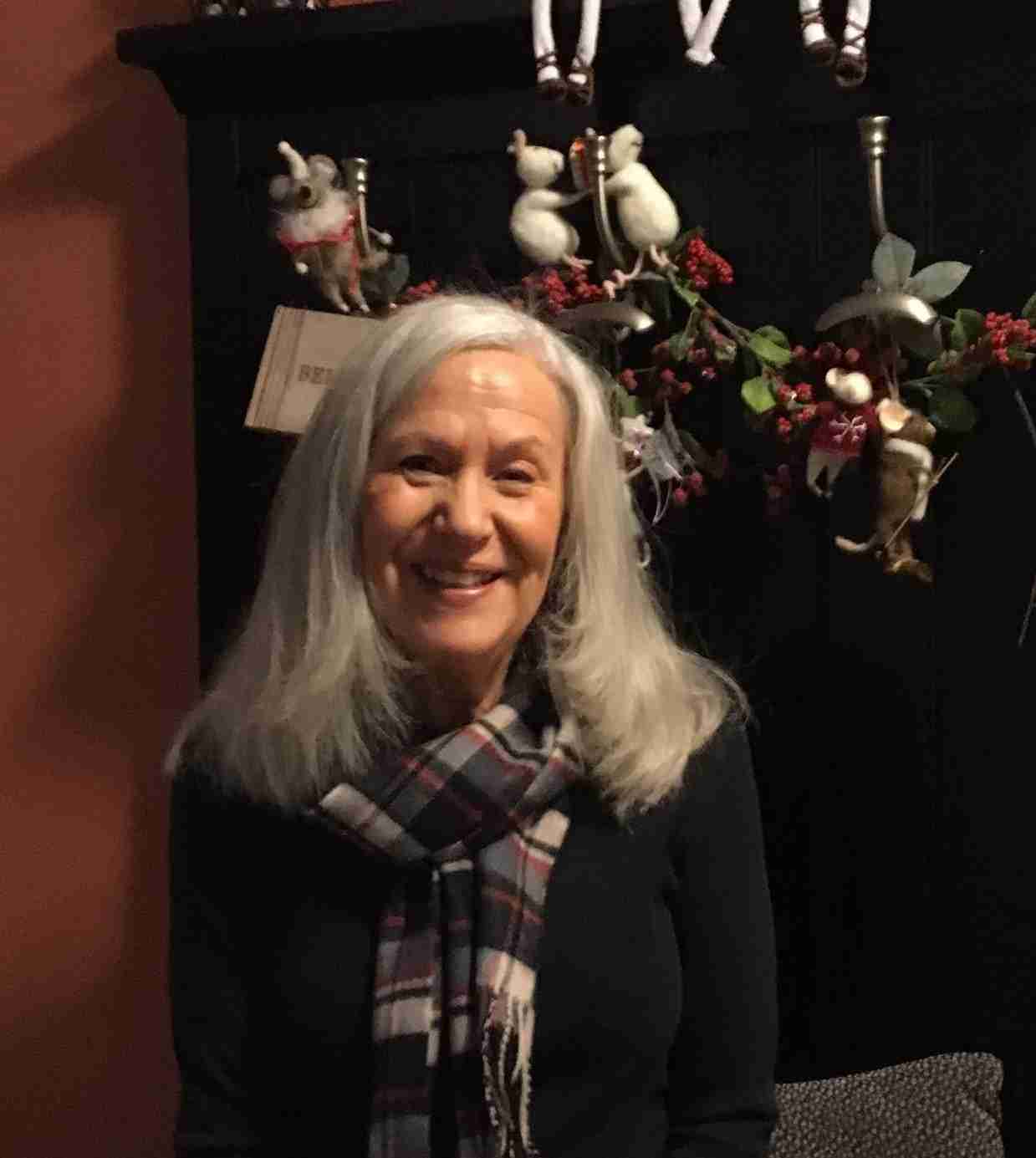 “Doing fine” was a series of challenges. She had three surgeries to remove the cancer. “We didn’t get it, didn’t get it.” At that point, Emily “didn’t have much of a heel left,” so she underwent an extensive reconstructive surgery. Soon after, testing revealed the satellite cells of spreading cancer and she was meeting with a specialist at Oregon Health & Science University.

A realistic look at the possibility of additional surgeries and a desire to keep her mobility led Emily to choose chemotherapy and amputation in January of 2010. It’s a decision she doesn’t regret. 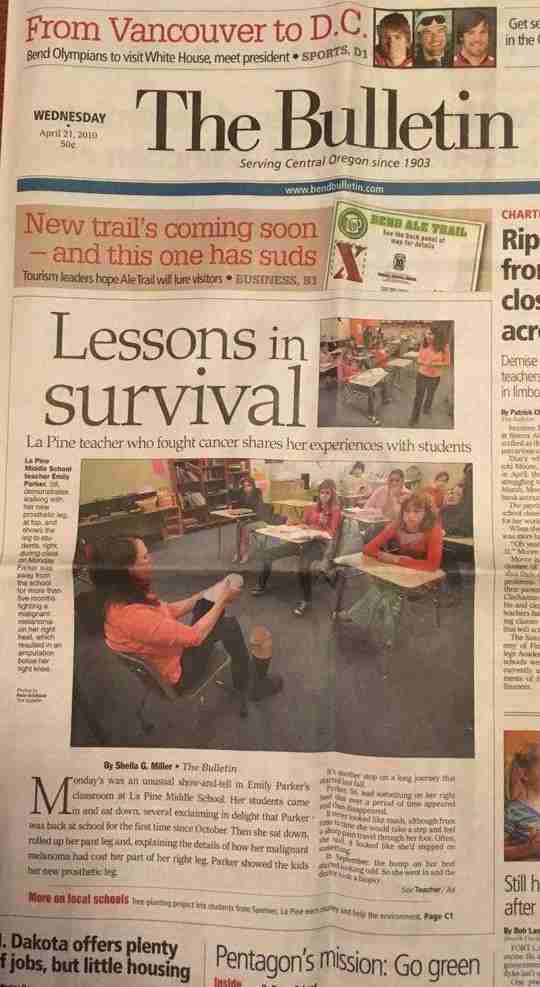 A lifelong educator, Emily was soon back in her classroom, rocking her prosthetic leg. Thanks to a call from her principal, an interview, complete with photos, soon landed Emily on the front page of the local paper. It was the beginning of her latest version of helping: demonstrating to the world that cancer and amputation were a part of her story – not the entire thing. She started hearing from people in the community who were inspired by her bravery. That inspiration wasn’t limited to cancer patients.

“A woman, whose name I don’t know, contacted me to say thank you,” Emily recalls. “She said ‘Thank you for being so bold in how you presented this to your students. I have false teeth and I’ve been too embarrassed to let my grandchildren know. Now, I don’t mind showing them.”

Talk to Emily for more than five minutes and you’ll recognize that she’s is a non-stop ball of energy, exceptionally committed to helping others. Which meant cancer was a learning experience as she had to accept her limitations. And help. Like so many patients learning to face their new normal, letting others pitch in was a hard-won lesson. “It’s a process of learning not to overdo. Not saying ‘I’m fine, I can do this’ when you need help.”
Like the teacher she is, Emily shares her own recollections to drive the lesson home when talking with patients. “I remember one time, I didn’t have my leg yet and I crawled up the stairs and was in my daughter’s room, trying to change the sheets or something equally important,” she recalls.  “Knowing it’s ok to sit still is the hardest part. Still. I remind the women I’m mentoring that it isn’t all about having to prove ourselves or make ourselves productive. It’s ok to ignore the old adage of ‘busy hands are happy hands.’ It’s ok not to have busy hands all the time.” 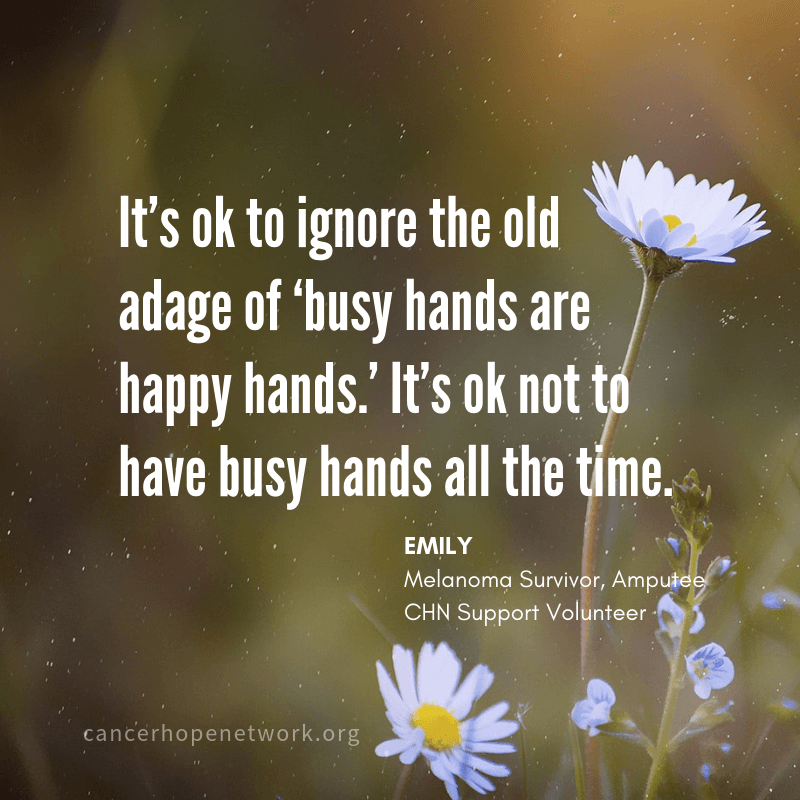 During her treatment, Emily was blessed to be surrounded by a community of care. “So many people reached out to me,” she recalls. “My 87-year old aunt and my cousin drove over the mountain in a snowstorm to be with me. They made all these meals to put in the freezer. My mother came, my husband and my daughter were amazing. My sister, and her quiet strength, was extremely helpful.”

It wasn’t just family who stepped up to show their concern. “People would drop by with meals, with cards. A woman I’d worked with, who I didn’t know all that well, who’d moved to another school and was pregnant with her third child – stopped by with food.” 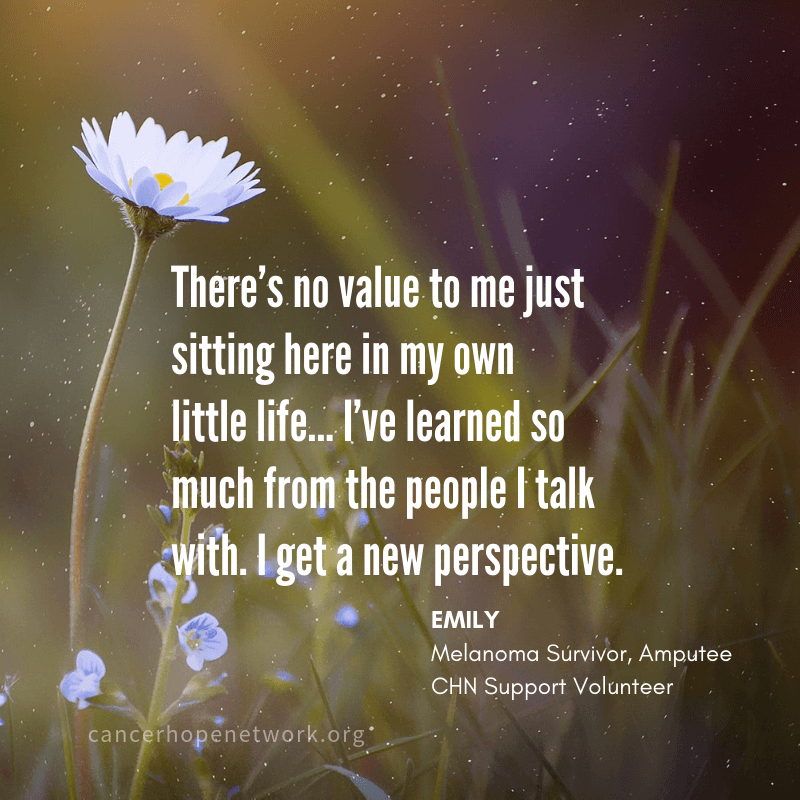 She recognizes how fortunate she was and is paying that care forward, first as a teacher, then in her work with amputees and today, as a CHN Support Volunteer since 2012. “When I was in treatment, I wasn’t communicating with other cancer patients. I was bathed with positive encouragement in general, but there wasn’t something like CHN for me.”

A woman of strong faith, Emily has spent a lifetime bolstering the people around her, especially to people who don’t have a strong support system. “I’m very grateful for the many things in my life, for the support I have. Knowing I can reach out is one of those things that keeps me going. It’s kind of the way I’m wired,” she muses. “There’s no value to me just sitting here in my own little life. And I’m not just sharing. I’ve learned so much from the people I talk with. I get a new perspective.”

“It’s ok to ignore the old adage of ‘busy hands are happy hands.’ It’s ok not to have busy hands all the time.” - Emily, Melanoma Survivor, Amputee, CHN Support Volunteer