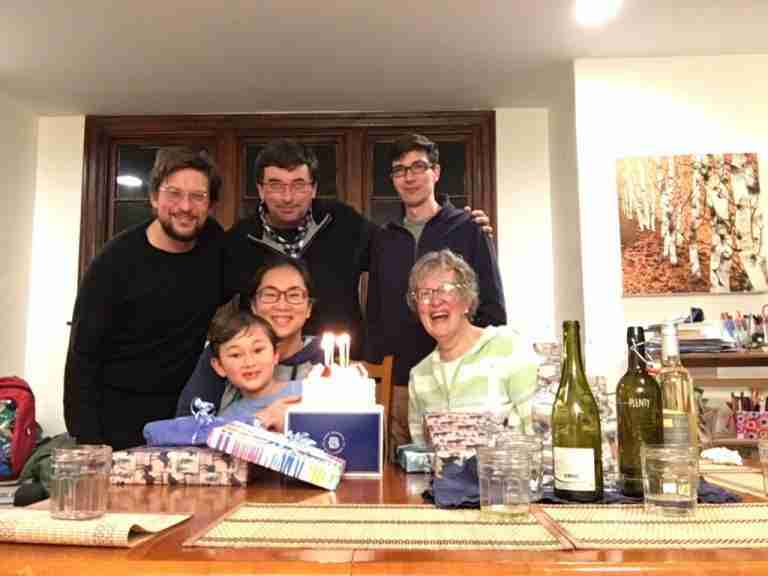 “My personality is ‘let me serve you, let me help.’ I had to learn that it was ok, I can take. There are times when it’s fine and good to receive. Because then, eventually, there will be times we can pay it forward and give back. That’s why I signed up for Cancer Hope Network.”

Ovarian cancer survivor Ann’s commitment to helping others didn’t start when treatment ended. Like so many of Cancer Hope Network’s volunteers, Ann spent many years helping others.

Her cancer was diagnosed when the tumor grew so large that she could feel it in her abdomen when she laid down. When an ultrasound showed a tumor on her ovary, Ann was soon at her first meeting with a gynecologic oncologist. Her biopsy-included hysterectomy was soon scheduled, and Ann and her husband prepared for the day, confidently hoping her results would be benign.

While she was still under anesthesia, the doctor came out to give her husband the terrible news. That moment has stayed with Ann. “He heard it and was alone. That was the hardest part of the whole experience.”

Armed with a diagnosis, they met with a medical oncologist to create her treatment plan. “We felt confident and had hope. I’m very grateful that we had that.” After recovery from surgery, Ann’s PICC line was soon installed and her chemo was under way.

“The days in the hospital were a blur. I was in pain. Once I got home, the first day Jeff was at work and I was alone for the first time. I knew I shouldn’t google, but I went to the American Cancer Society’s page. The first thing that popped up was an article titled ‘Ovarian Cancer, Silent Killer.’ I slammed the computer shut and started sobbing. I decided then and there that I wasn’t going to pay attention to what people were saying and listen to my doctor instead.”

As treatment progressed and difficult side effects presented challenges, the hope she’d given others for through the years came flooding her way. People showed their care in a variety of ways – sending cards, making grocery store runs, or dropping flowers on her porch. “Friends would come and sit with me. They didn’t care if I looked crappy. We sat and talked. And they were ok when I couldn’t take any more. I could be honest.”

Help showed up in other practical ways. “I was on staff at my church’s children’s ministry. There were three of us on staff ,and the other two, plus volunteers, took a lot of work from me. My church continued to pay me my normal salary, even when I was out for chemo. They were supportive over and above the job and the financial help. They were like family. I am very grateful.”

A group of friends a little older than Ann rallied, wearing hats in solidarity. One distracted her with an invitation to go shopping. “It was the first time I took my scarf off in public. Here we were in this store trying on hats and it was so much fun.”

Family helped as well. Her son had just moved out but started coming for coffee on his way to work. “It was so special. I remember one time I had made coffee and he brought muffins. I was so sick from the chemo and I forced myself to eat because he’d brought it.” Her son, daughter-in-law and young grandson Noah made a 14-hour drive three times in three months. “Noah was a distraction. I just laid on the couch watching him play. It was awesome.” Today, her relationship with fast-growing Noah is strong. “We are blessed to now be living close by and able to see Noah a few times a week!”

Through treatment and recovery, Ann found solace in her faith. “I’d never want to force my belief down anyone’s throat, but my faith sustained me. Scripture has always been an encouragement for me and that continued as I turned to the Bible for hope. I clung to those verses through this time.”

Once treatment was complete, Ann and family celebrated with a party – complete with all of the guests decked out in hats.

She was grateful to avoid the lingering side effects experienced by some but struggled as she adjusted to her new normal. “I didn’t feel like the same Ann that I was before I had cancer. I was searching for normal.” She and her husband Jeff, staunch allies in the fight, had to adjust. “We’d gotten wrapped up in fighting and dealing with my cancer. We worked really well together and afterwards, we had to find our new normal.”

She channels that experience into conversations with her CHN clients. “I think sometimes it is easier to talk about something like cancer with someone you don’t know – someone who doesn’t know your family and friends, who never run into you or your husband at the store.” She encourages patients with the hope that things will adjust, and life will move along.

Today, she’s back to her pre-diagnosis ways, helping and volunteering and supporting others. She’s creating hope one match visit at a time. “If something good can come of this, Yay.”

“Sometimes it is easier to talk about something like cancer with someone you don’t know – someone who doesn’t know your family and friends, who never runs into you or your husband at the store.” – Support Volunteer Ann, Ovarian Cancer Survivor