From belly dancers to Bermuda: finding hope after cancer. 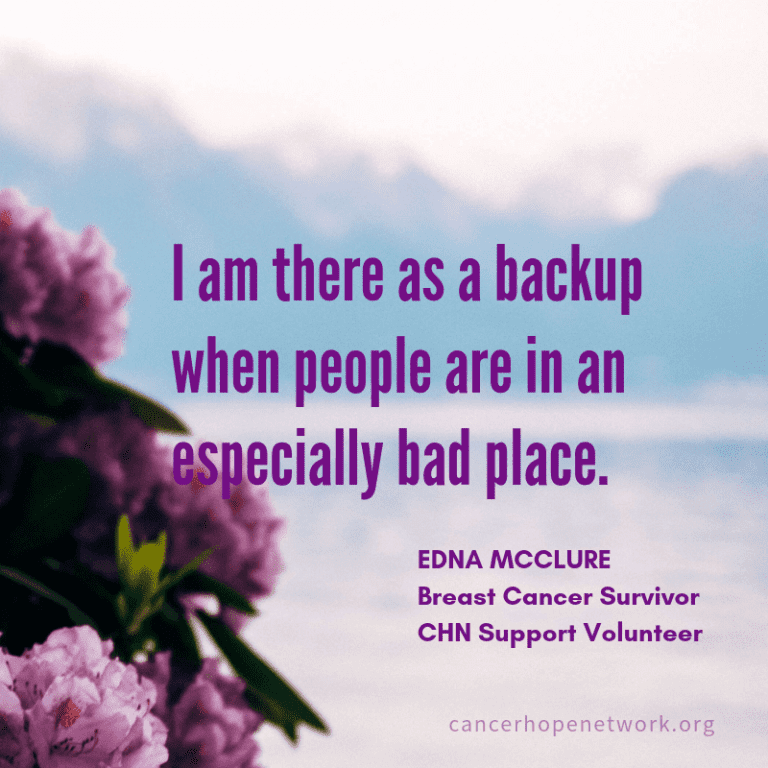 Diagnosed with breast cancer nearly 40 years ago, Edna McClure is a living, breathing billboard for hope. “When my matches hear 37 years, the conversation is pretty much done. I don’t have to say much more.”

After months of mis-diagnoses (“Like many women back then.”), she went to a new doctor with a lump that wouldn’t go away. It turned out to be cancer that had metastasized to her lymph nodes. The prognosis was grim. Even with chemotherapy, another year of life was a long shot for this single mother of two.

The diagnosis came just three months after she’d started dating her husband. She laughs, remembering. “I had a girlfriend. She went up to him and said, “You know she’s been diagnosed. If you’re going to walk away, now is the time.’ He started to cry. My husband was six foot five and weighed 300 lbs. She was this tiny thing. But she said what needed to be said. And he stuck. Years later, I was fortunate to be able to stick with him through his things. He had throat cancer on both sides of his neck. He had heart failure. We bought a year of extra time with him thanks to an LVAD (left ventricular assist device).”

She worked through treatment and celebrated as life returned to normal. “When my hair grew back, I set my wig on fire. To me that wig said that I had cancer.” Her advice for patients still going through treatment flows from that experience. “I tell people that when their chemo is going to be done, plan something for that day. Go somewhere. Do something. Give yourself treats.”

She’ll never forget the friends who’ve stood by her side. During treatment, their focus was to help her “keep normal life going.” It wasn’t fancy, but it was meaningful. “I was a single mom with two kids. I couldn’t get wild and crazy. They weren’t trying to fix me or pamper me. We’d go to dinner, to the beach. We went to see Billy Joel. That was probably the best way she could have helped, just going out and having fun.”

Until treatment is over, she’s encourages patients to find the support that helped her – and the stiff upper lip that is her hallmark. “You just have to go on. You can get past this. You’ll have times when you will feel really bad. Call someone. Don’t sit there and suffer. If not us, call your best friend. You can pity party after you’re all cured.”

She came across an article about Cancer Hope Network and thought it might be a good fit. “I was feeling better, it was time to give back.” She attended training and was on her way to her first match – a belly dancer. “We had a great conversation on how to continue what she did for a living. I showed her my prosthesis. We talked about how she could sew some lace over it.” It was an auspicious beginning to her years as a Support Volunteer. She met up with another of her matches while on vacation. “We’d been matched for a while and she called to invite me to her wedding. I told her that I’d be in Bermuda. Turns out, she was honeymooning in the hotel next door. I’d like to have all my matches in Bermuda!”

Her kids are grown. “I wanted to be around for them. Now, I have four grandchildren. Two live in the same town with me and the other two are close by.” Her grandchildren are understandably proud of their Nana. “They understand what I’ve gone through. One grandson wrote a paper about me for his confirmation at his church. He wants to become a nurse.” They’ve all internalized life’s important lesson, “We never say no to Nana.”

In the decades since her treatment, she’s faced an array of complications, spending much of her time since 2015 in and out of the hospital. A hole in her colon and the infections it brought mean that she lives with an ostomy bag. It hasn’t been simple, (“Cancer was easier!”) but she hasn’t let it stop her. And things are looking up, “It’s been over a year since I’ve been in the hospital. It’s been great.”

After all these years, she’s reflective. “It’s been a long time. I enjoy talking to people, knowing that I’m helping them, knowing I’m giving them some sort of inspiration.” She’s ready to step up whenever someone needs it “I am there as a backup when people are in an especially bad place.”

In addition to her work as a CHN Support Volunteer, she remains a dedicated volunteer for her local hospital and The Valerie Fund’s Camp Happy Times, helping people of all ages live the fullest version of their lives.

Her focus on positive thinking is strong (she allows herself one “pity party” each year on St. Patrick’s Day). “You have to go through it. Don’t let it control you. Don’t make cancer who you are. Cancer is just a disease.”

Sarah Miretti Cassidy is the Director of External Affairs for Cancer Hope Network. Contact her at 908.879.4039 ex 20 or scassidy (at) cancerhopenetwork.org.

“Don’t let it control you. Don’t make cancer who you are. Cancer is just a disease.” - Edna McClure