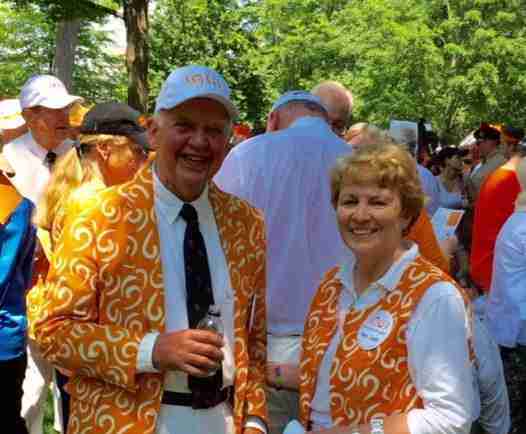 In 2016, Paul “Whitey” Finch and his beloved wife Vance attended his 55th class reunion at Princeton. It was a four-day affair, complete with friends, tennis games and overnight stays in dormitories. It almost didn’t happen.

Whitey was diagnosed with Acute Myeloid Leukemia (AML) in 2012. Like many, his diagnosis was a whirlwind of tests and doctors’ appointments. At the time, standard of care was to treat AML with an especially powerful form of chemotherapy that often resulted in hospitalization or worse. “My doctor was telling me ‘Some of the older guys die from this chemo’” Whitey recalls. “And I was one of the older guys.”

He began a clinical trial with a milder form of chemo. As that progressed, he received periodic bone marrow biopsies so his medical team could check his blast count (a shortened version of myeloblasts: abnormal immature white blood cells that overproduce in patients with AML). Once his blast count was down, he transferred to the care of a transplant specialist. 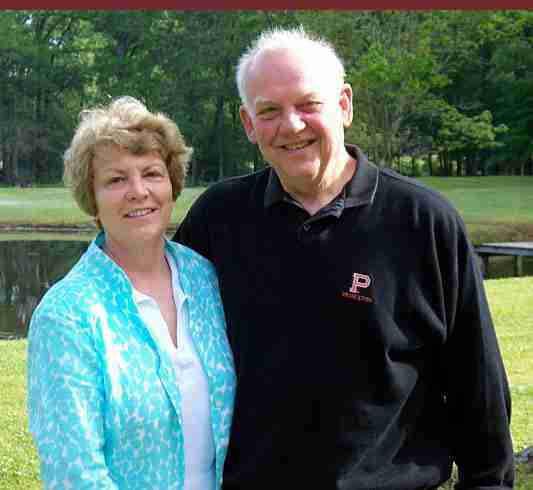 Above and beyond: A wife’s support after transplant

Whitey is deeply grateful for the support of Vance, his wife of more than five decades. “I was getting outpatient chemo at the time,” he recalls fondly. “The Northeast was getting a huge snowstorm and the mayor of Boston had banned all automobile travel. We knew the snow was coming on Friday and my chemo was scheduled for Saturday.

Rather than miss a treatment, I had checked into the hospital. Vance was at the Hope Lodge (a “home away from home” for patients and caregivers who have to travel a great distance for treatment). I’m sitting in my hospital bed, watching snow removal out the window and she shows up. She walked a mile and a half to see me and a mile and a half to get back.”

Shortly thereafter, Whitey saw a notice from Bob Pickens about the Princeton Class of 1961 Caring Network. The program is a joint effort between the Class of ’61 and Cancer Hope Network. Whitey was soon connected with a CHN Support Volunteer. “He was a nice guy. Very pleasant,” Whitey remembers.

It’s been four and a half years since his successful bone marrow stem cell transplant at Dana-Farber. Today, Whitey pays forward the encouragement of that conversation as a trained member of the Class of 61’s Caring Network and as a national CHN Support Volunteer. “Most of the patients I speak with have not had a stem cell transplant. They are waiting for one, thinking about it, hoping to get one,” he says. “I describe what it was like to get the transplant – in detail. I tell them everything I can think of that led up to my transplant – and tell them about my life post-transplant.”

“I don’t give them medical advice,” he continues. “I’ll tell them what my doctors tell me and try to follow up with them as they progress through their cancer journey. I just want to answer their questions, to tell them about the experience. They need to know the answers. I tell them about my experience and encourage them that it’s possible to live after being diagnosed.”

“Graft vs Host Disease (GVHD) is very common for people who get stem cell transplants. Right now, I have dry eyes, dry mouth and swelling in my hands, but I’m still able to grab a tennis racket. I grow vegetables, everything. I rake leaves in the fall and shovel the driveway in the winter. I try to walk a couple miles every day. Exercise has helped in my recovery. I was pretty weak when I got the transplant, but gradually, my strength is coming back.”

About Cancer Hope Network and The Caring Network

The class of 1961 Caring Network aims to assist classmates and their families who are dealing with medical problems as well as financial or legal issues. It was established in 2013 by the Princeton Class of 1961 Caring Committee which the class foundation started in 2012. Shortly after formation, the Caring Network partnered with Cancer Hope Network (CHN), a New Jersey-based non-profit organization. The year before, two of the committee’s members, Joe and Ev Prather, attended CHN’s annual Chrysalis Gala and learned about the organization.

Thinking back at the number of fellow alumni they knew who were dealing with various health issues, including cancer, Joe and Ev were inspired. What if their friends and classmates could speak with one another, offering experiential knowledge and support? The thought of building such a program from the ground up was daunting.

They brought the idea back to the Caring Committee and members Dr. Bob Pickens and Joe Prather, subsequently reached out to Wanda Diak, Executive Director for Cancer Hope Network. The Caring Committee and Cancer Hope Network worked to design and implement a custom program for the Class of ’61 Alumni, calling it “The Caring Network.” The collaboration leverages the volunteer support resources and management expertise of CHN’s long history in a way that’s specifically designed to meet the needs of ’61 alums.

For more than 40years, CHN has provided confidential, free, one-on-one support for cancer patients and their loved ones. CHN matches patients with a trained volunteer who has had a similar cancer experience – often connecting based on the type of cancer, treatment protocol or important psychosocial factors.
In the fall of 2014, 12 Class of ’61 alumni participated in training sessions to become Support Volunteers.

Their experiences both as patients and caregivers cover an array of illnesses including cancer, diabetes, heart disease, orthopedic procedures, neurological disease, sleep apnea, and more. They are able to support fellow alumni who are struggling with illness and the many challenges it brings. A few who are cancer survivors (like Paul) have even gone on to become volunteers for Cancer Hope Network’s national program.

To connect with Whitey, Bob or another survivor, please contact Cancer Hope Network at 877-467-3638 (877-HOPENET) or request a match at cancerhopenetwork.org/getmatched. 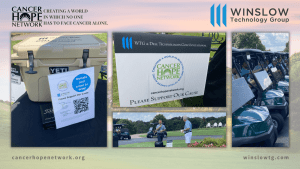 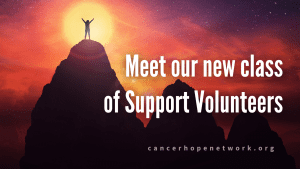 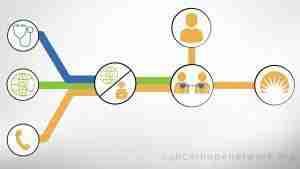